Approaching Easter of 2014, I was 18 months into my journey toward veganism. I was still hanging onto a few animal products in my diet, like cream in my coffee and some social situations. I stumbled across a review of Victoria Moran’s Main Street Vegan Academy online and immediately knew I wanted to take part. The only issue was that I had to be a dietary vegan to do so. I made the decision then and there to eat only plants moving forward, and then applied to the program. The required reading leading up to the academy was excellent reinforcement and motivation for those final changes I made. Until then, I had been learning mostly about the health benefits of veganism. But now, I was also learning more about the plight of the factory farmed animals and the impact of our diet on the environment. There was no turning back to my old ways, and to this day, I am thrilled about that.

The academy was a dream! Six jam-packed days in New York City, learning from and being inspired by a myriad of instructors. Our small group of 20 or so were headed toward becoming Vegan Lifestyle Coaches and Educators (VLCEs) through this program. We learned about all aspects of veganism to help us help others to make the change. Many graduates have gone on to make or sell vegan products, coach, blog, write, and cook. The options are endless.

We learned from not one, but two cardiologists, who were excited about promoting plant-based eating to their patients. Among many other instructors, there was a vegan dietician, a vegan personal chef, animal rights advocates, social networking gurus and a vegan clothes designer. I have to say that one of the most memorable though was John Joseph, who is the rough and tumble lead singer of the Cro-Mags, a triathlete in his 50s, and author. He shared with us his life story, details about his journey toward veganism and all the various ways he works to get others on board. I was so impressed!

But the academy experience didn’t end in New York. Victoria Moran fosters ongoing support among all graduates through Facebook and other means. Over 300 students have now graduated from the academy. We use the forum to post our questions and concerns as we journey forward into new territory, and celebrate our successes with one another. It is a like-minded and inspiring community of which I feel fortunate to be a part. 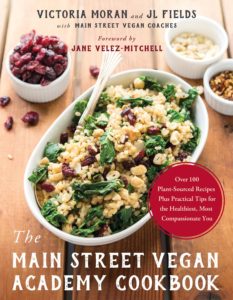 It was through this community that The Main Street Vegan Academy Cookbook was born and landed on North American bookshelves in December. Academy alumni contributed their favorite recipes and coaching tips. You can imagine the result from this team of passionate (and compassionate) individuals, with Victoria and JL Fields (an absolute dynamo) leading the way. The book also includes three chapters written by Victoria about going vegan. As always, she writes beautifully and encourages people along the path in such a gentle and non-judgemental way that we can’t help but feel positive about participating to any degree in the vegan movement.

I am slowly making my way through the recipes. I started with Victoria’s contribution of “Death-Defying Garbanzos and Greens” in part because I was curious to try something she eats, but also because it looked super-quick to make. We made it and devoured it in no time flat and will definitely add it to our rotation. Next up: “Cranberry-Kale Pilaf”. Another hit as far as my husband and I were concerned. The flavours combine perfectly. I will be bringing it to the next potluck. Check out the recipe below! “Lindsay’s Famous Raw Brownies” were strongly recommended to me by a vegan foodie. I always have all three ingredients on hand, so am very excited about making them this weekend. And the “Sweet Red Chili Potato Skins” caught my eye…who doesn’t love potato skins?!

This dish makes a colorful addition to any holiday dinner table, whether as an entrée or a side. Kale and cranberries are a delightful culinary combo and equally well paired nutritionally. Kale is high in fiber, vitamin A, vitamin C, vitamin K, iron, calcium, and magnesium and is rich in antioxidants. Cranberries are also antioxidant powerhouses and replete with vitamins and minerals.

In a medium saucepan or rice cooker, cook the rice in the broth according to the package instructions.

About the Author: Teresa Ford

My journey to a whole-food plant-based diet started with my husband’s struggle with high cholesterol. He wanted to avoid taking medication, but the dietitian-prescribed changes weren’t going to be sufficient. So we gave plant-based eating a try and his cholesterol levels dropped into the normal range. Amazed, I continued to learn about the many significant ways our diet impacts our health. I became passionate about inspiring people to eat delicious and nutritious plant-based food for maximum wellness by way of writing, speaking and coaching services. I have a Nutritional Science degree and worked in the field of clinical research for many years. As a Mayo Clinic Certified Wellness Coach, I apply best practices to help people make lasting improvements in their approach to eating.